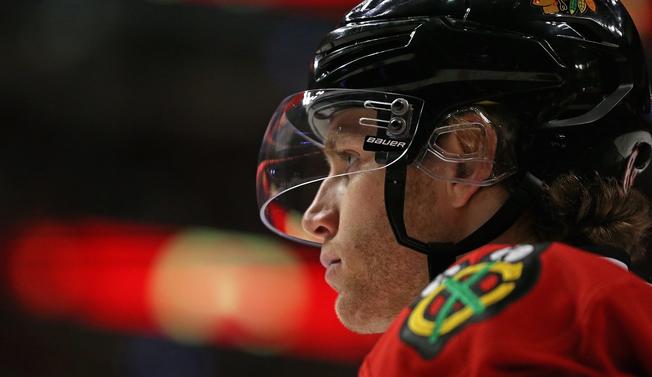 It was a sweet ending to a difficult homestand for the Chicago Blackhawks.

Kane had a goal and three assists, and the Blackhawks stopped a three-game slide with a dominant 7-2 victory over the Toronto Maple Leafs on Monday night.

“We’ve been, I don’t want to say struggling offensively, but we’ve been waiting for a game like this,” Kane said.

Andrew Shaw, Brent Seabrook, Artemi Panarin and Teuvo Teravainen each had a power-play goal, helping Chicago salvage the finale of a lackluster four-game homestand. It was the Blackhawks’ first game since they lost Marian Hossa to a left leg injury, likely sidelining the veteran forward for a couple of weeks.

“It was good that we got something positive leaving here,” coach Joel Quenneville said.

Scott Darling got the start in place of a resting Corey Crawford and made 35 saves, including an outstanding sprawling stop on Nick Spaling in the second period. Two of Darling’s six wins this season have come against lowly Toronto.

Mark Arcobello broke up Darling’s bid for his second career shutout with a rebound goal with 8:54 remaining. Pierre-Alexandre Parenteau added a power-play goal and James Reimer had 25 saves for the Maple Leafs, who closed out a 1-4 road trip.

Goals by Brandon Mashinter, Shaw and Seabrook staked Chicago to a 3-0 lead through two periods, and the Blackhawks blew it open with an impressive flurry in the third. Beginning with Panarin’s 19th goal of the season, the defending Stanley Cup champions scored on four of six shots.

Kane made it 5-0 with his 34th of the season, sending a wrist shot past Reimer on the stick side. Teravainen then stopped a 17-game scoring drought with his 10th of the season, and defenseman Viktor Svedberg converted a big slap shot from the low slot at 10:20.

“We had a lot of guys score tonight,” Kane said. “Maybe it gives them some confidence, maybe the whole team confidence offensively. It’s always important in here not to really worry about the offense. We know the goals are going to come.”

The four points matched a career high for Kane, accomplished three times just this season. He had three goals and an assist in a 4-1 victory at Toronto on Jan. 15 and leads the NHL with 82 points.

Duncan Keith added three assists for Chicago, which improved to 22-7-2 at home. Shaw finished with a goal and two assists, and Panarin also assisted on Kane’s goal.

“We haven’t played great,” said Shaw, who played with a cut near his right eye after a mishap during the morning skate. “We weren’t doing the little things right. We weren’t winning those 1-on-1 battles. We came out of that tonight and came out here and had a good first and built on it.”

Chicago was leading 3-0 in the second when Darling dove to grab Spaling’s shot, drawing a big ovation from the crowd of 21,767.

You can just beat Barcelona when you detract the ball from them: Ex-mentor Pep Guardiola